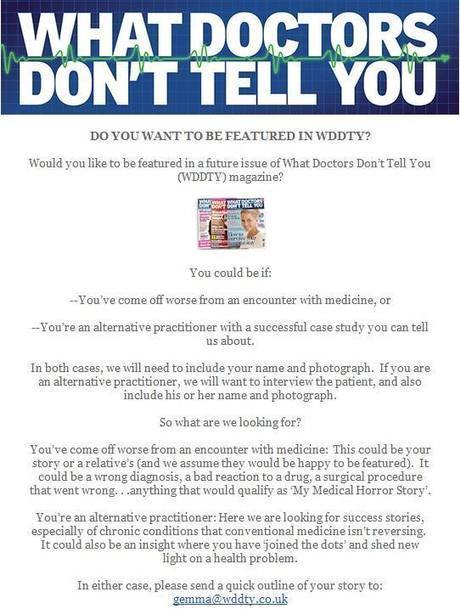 The latest November issue of What Doctors Don’t Tell You has appeared and has delivered on its promise to devote an issue to cancer treatment with homeopathy and other quackery. It has been a tense…See more on The Quackometer.

Here is an interesting testimony on how far proponents of quack medicines can go to promote it. As the author of the Quackometer shows here, you have it all: paranoïa with respect to contradictors, false accusations against science and the industry, wrong or completely outdated information on scientific theories, conspirationisme, and encouragement to fear and distrust scientists and doctors. One can talk of a complete anti-science, irrational and twisted mindset, with absolutely no thoughts for those who might listen to this crap and actually badly suffer from the consequences of using it to solve serious health problems!

This story concerns the UK, but I’m pretty sure I could find similar ones in other European countries, especially those where so-called alternative medicines (SCAM) are popular. I’m thinking more specifically of Switzerland and Germany, which are actually the craddle of several quack philosophies and sciences, such as homoeopathy and anthroposophy.  A couple of days ago, a popular radio show on a Swiss French-speaking public radio station devoted 20 minutes to ayurvedic medicine, telling people that it could treat (but not always heal….how convenient, isn’t it?) any pathology, from bruise to deadly cancers! And no one in the show opposed the slightest contradictions to the promoters invited to express themselves on their miraculous cures! They didn’t even raise the slightest interogation when the ayurvedic “doctor” talked about “bio-energies” or chakras! It is a shame, because I’m pretty sure she would have been at a complete loss to explain us the nature of these energies!

A daily selection of the best content published on WordPress, collected for you by humans who love to read.

The Logic of Science
SignificaNS